How to properly install cleats in cycling shoes?

MIPS technology. What is it and for whom?

What to consider when choosing and buying a cycling jacket? MIPS technology. What is it and for whom?

As a cyclist, you must watch out for obstacles in the roads, bicycle paths and watch over children, for example, who are riding with you. Besides, you cannot predict what other road users will do. A moment of distraction and you fall to the ground, often with great speed and force. If you had a helmet with MIPS technology, it would be without concussion and a few other injuries ...

Why do you need to get the right bicycle helmet? While cycling, various dangers await you, your relatives or friends. Terrain obstacles, falls through branches, curbs, stones - fainting. A moment of inattention and you hit your head on a hard surface. The same can happen to you on a mountain descent or on the road at a huge speed of up to 80 km / h. "I am careful on the road, I drive carefully ... and why scare someone?" Only on the road you are not only alone.

According to the data of the Polish Police Headquarters, there were 1,329 accidents in 2017 as a result of the failure to give priority to two-wheelers by cars. Unfortunately, 9 cyclists died due to right-of-way enforcement and the rest suffered minor or more severe injuries. 42 cyclists died due to inadequate speed adjustment or an incorrect overtaking maneuver. The same maneuvers of motor vehicles have led to more than 400 accidents involving two-wheelers, and the statistics are many more. Incorrect evasive, avoiding, reversing or lack of a proper distance from the cyclist is another dozen killed and several hundred injured.

Scary statistics, right ?! So much misfortune for other road users ... Each of these accidents resulted in, for example, fractures of the limbs, ribs, hip pelvis, spine injuries. Often these are changes that can be healed, but not brain damage. Strong concussion, irreversible changes in the brain tissue and, consequently, limb paresis, mental retardation, skull fractures are often very difficult to treat (long-term rehabilitation) or impossible to heal injuries. A MIPS bicycle helmet can prevent them.

MIPS technology - what is it?

You already know what a bicycle helmet protects against and under what circumstances. However, the helmet itself is often not enough. An ordinary model will partially cover the crown, the skull and cushion the impact. However, it may move, fall off, or break. When you roll and hit your head again on a hard surface without cover, the risk of survival is reduced by 85%.

MIPS (MULTI-DIRECTIONAL IMPACT PROTECTION SYSTEM) is a multi-directional impact protection system. The system is based on a special bicycle helmet design which isolates the upper shell from the soft inner lining. Both parts do not directly influence each other. During an impact or friction, the shell perceives the impetus and moves gently, thus adjusting to the type of impact. The inner part stays in place, preventing the helmet from shifting and exposing sensitive areas. This is especially important in the case of repeated head hitting the ground, oblique hit or a fall at a large angle - a steep descent or a fall from a height.

What happens to your head in an accident?

If you fall off your bike to the ground, you are doing something you don't know… you turn your head. This is extremely important information, because you do it instinctively and every time, even when you hit a car or an obstacle. You don't attack frontally with your forehead, but avoid the threat. Currently, helmets usually protect against a straight blow, but not always against diagonal - at an angle, to the side. And there the head is very sensitive, because the skull covers the brain the least. Not only do you reveal sensitive places intuitively, but you also hit them many times as a result of inertia. An ordinary helmet falls off and there is a tragedy ...

MIPS technology absorbs the side impact through the shell. There is no excessive, rapid displacement of the head and brain, which protects the sensitive organ from shock. The Giro brand - a well-known and reputable manufacturer of bicycle helmets, emphasizes that their models protect against rotational movement by reducing rotational forces. Amazing, isn't it? And this is scientifically proven ... 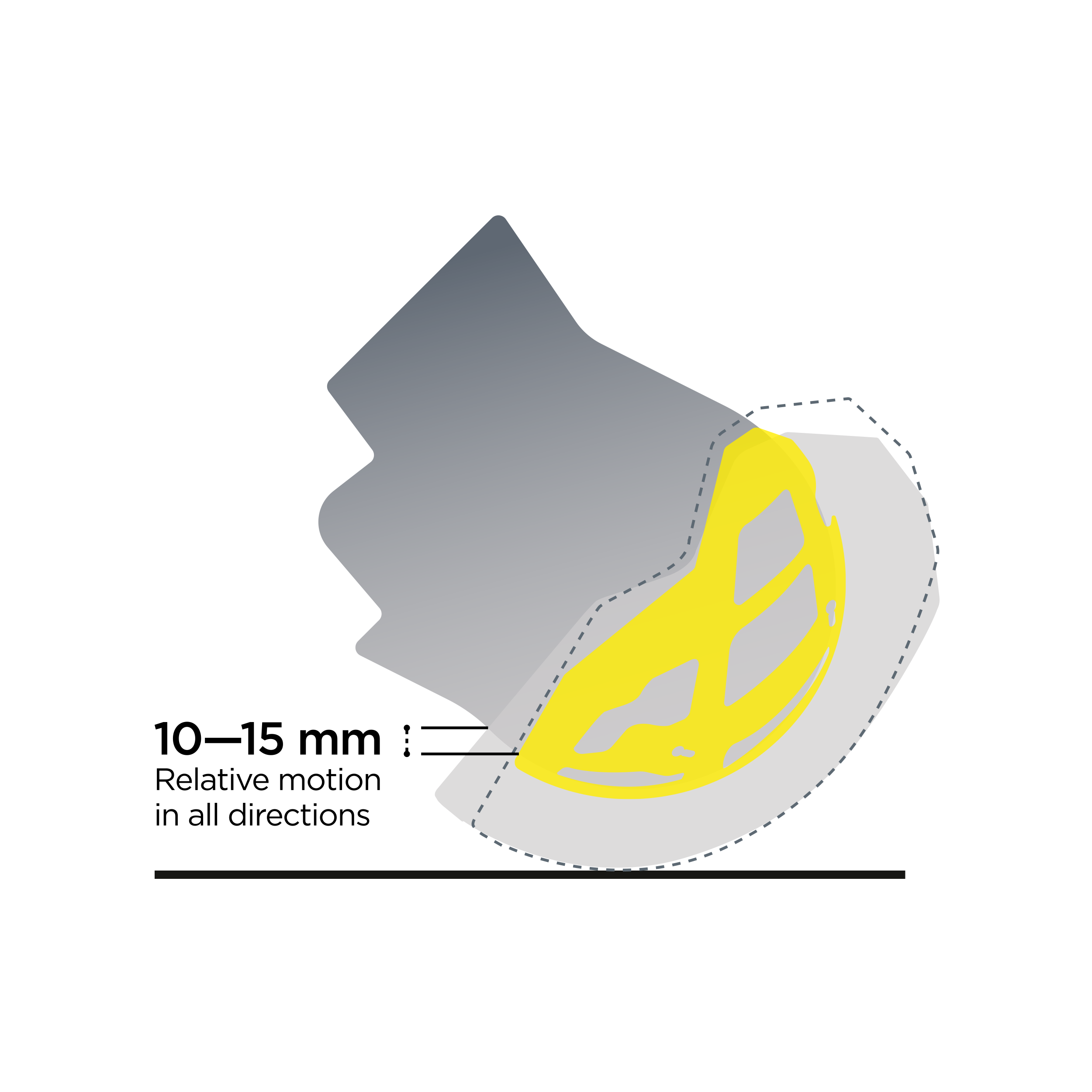 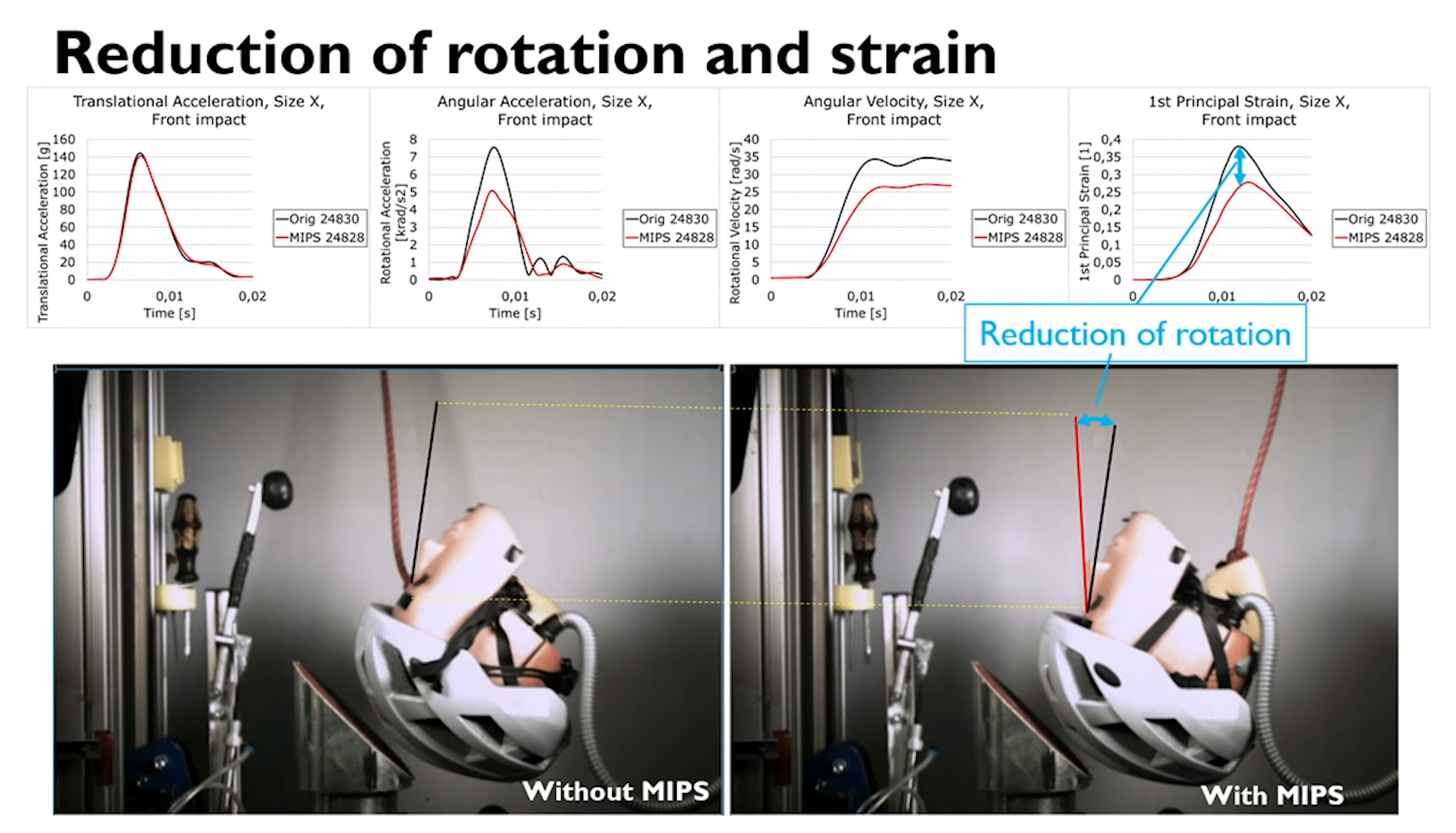 The quality of MIPS bicycle helmets is confirmed by tests

One of the most famous and advanced technology laboratories Testfakta, the SP Sveriges Tekniska Forskningslaboratorium in Borås, Sweden, tested helmets with MIPS brand, among others Giro, Bell or Lazer. Bicycle helmets with and without MIPS technology are placed on five mannequins.

After the crash test, the deformation of the brain tissue was analyzed. The higher the deformation, changes in brain tissue, the greater the chance of concussion and other injuries. The study showed that MIPS bike helmets reduced brain tissue strain by 4 times. Now you know what MIPS is, how it works, what it protects against ...

Just how to fit a MIPS bike helmet and where to look for it?

Remember! The helmet must fit snugly, so choose the right size by measuring your head with a centimeter 1 cm above the ear and temple or use the manufacturer's description. Some models have a special auto-fit technology with adjustable tension on the movable element, so read the specifications of the specific helmet carefully.

Is MIPS technology functional and useful? Rather a rhetorical question, because, as the statistics from the introduction and scientific studies show, accidents involving cyclists are counted in thousands, and their injuries are quite extensive ... Bicycle helmets by themselves increase the chances of surviving an accident by 85%. MIPS bicycle helmets further reduce the risk of a fall on the head by a factor of four ... which allows you to return to normal life, full mobility, and sometimes get out of a serious accident without major injuries.

If you want to see what we're talking about, check out our offer below

What to consider when choosing and buying a cycling jacket?